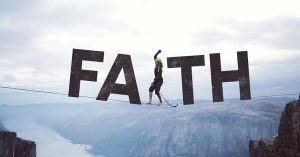 What does faith look like and why is it important?

It’s been said that, “God loves us as we are, but He loves us too much to leave us that way.” In so doing, God will call us to take new steps of faith in our walk with Christ.
Colossians 2:6 (NASB) says “Therefore as you have received Christ Jesus the Lord, so walk in Him.”
How did we receive Christ as Savior and Lord? By faith.

How are we to walk in Him? By faith.

“The believer should not shrink from situations, positions, or circumstances in which his faith may be tried, but he should cheerfully embrace them as opportunities to see the hand of God stretched out in help and deliverance. Thus his faith will be strengthened.” – George Muller

What we’re talking about today is exactly what Paul was speaking of in Romans 8:28-29:

“And we know that God causes all things to work together for good to those who love God, to those who are called according to His purpose. 29 For those whom He foreknew, He also predestined to become conformed to the image of His Son, so that He would be the firstborn among many brethren;” – Romans 8:28-29 (NASB1995)

The committed Christian understands that God will work in his life through circumstances to stretch and shape his faith. Therefore, he has an attitude of faith in God regardless of what he may be facing in life, whether it is a challenge to meet or a trial to endure.

Joshua was called of God to meet a challenge. Specifically, it was the challenge of leading the children of Israel into the land of promise. From what the Lord says to him, we can learn some valuable lessons about faith. Our passage for today is Joshua 1:9

Joshua 1:9 – “Have I not commanded you? Be strong and courageous. Do not be frightened, and do not be dismayed, for the Lord your God is with you wherever you go.”

The center of our faith is the Word of God.

“Those who know God know that He is bound by his own promises and integrity, not by our wishes. Moreover, unlike us, God never finds himself in the uncomfortable situation of having made a promise He no longer wants to or is able to keep. God is never caught by surprise. God’s promises are made in his infinite wisdom as part of His eternal plan and are backed by His matchless power. What God says, He does. God, because He is God, is a promise keeper.” – Scott Hafemann

We see from what Joshua is told here that faith is characterized by . . .

When one has an attitude of faith, it is revealed by their faithfulness.

2 Samuel 10:12 says “Be strong, and let us show ourselves courageous for the sake of our people and for the cities of our God; and may the Lord do what is good in His sight.”

2 Chronicles 15:7 says “But you, be strong and do not lose courage, for there is a reward for your work.”

“Faith is a refusal to panic.” – Martyn Lloyd-Jones

Adoniram Judson, and his wife, Ann, were the first missionaries to the country of Burma. They went there in 1812. It was tough.

There was not one known Christian in that land of millions. And there were no friends for them there, either.

A baby was born to alleviate their loneliness, but eight months later, Roger William Judson was buried under a mango tree.

Opposition came also. At one point, Judson was imprisoned as a British spy – an imprisonment of twenty-one months. He was condemned to die, but in answer to prayers and the pleadings of his wife to officials, Judson’s life was spared as British intervention freed him from imprisonment.

And it was six, long, soul-crushing, heart-breaking years before the date of the first decision for Christ.

What was Adoniram Judson’s perspective?

“The future is as bright as the promises of God.” – Adoniram Judson

When we trust God to enable us to either meet a challenge or endure a trial, you can count on it, God will show up!

2 Chronicles 16:9 (NKJV) says “For the eyes of the Lord run to and fro throughout the whole earth, to show Himself strong on behalf of those whose heart is loyal to Him.”

God showed up and showed Himself strong on behalf of Joshua, as he and the Israelites experienced great victories in places like Jericho, for example. And He will do the same for me and you.

On June 27, 1819, when Judson baptized the first Burmese believer, Moung Nau, he jotted in his journal: “Oh, may it prove to be the beginning of a series of baptisms in the Burmese empire which shall continue in uninterrupted success to the end of the age.” Converts were added slowly – a second, then three, then six, and on to eighteen.

At age 62, Judson died. He had spent thirty-eight years in Burma. Although he had waited six years for his first convert, sometime after his death a government survey recorded 210,000 Christians, one out of every fifty-eight Burmese had come to Christ!

Why was Adoniram Judson able to endure the trials he faced and rise to the challenges he did? Because he was a man of faith – he trusted God to the point where he obeyed God’s call – whether it was to meet a challenge or endure a trial.

[At Ava, the capital city at the time, Judson gazed at the temple of Buddha and wrote, “A voice mightier than mine, a still small voice, will ere long sweep away every vestige of thy dominion. The churches of Jesus Christ will soon supplant these idolatrous monuments and the chanting devotees of Buddha will die away before the Christian’s hymns of praise.”]

Once, Jesus’ disciples faced with a challenge they were not able to accomplish. When they asked Jesus why they couldn’t do what needed to be done, He replied:

Matthew 17:19-20 (NASB1995) “Then the disciples came to Jesus privately and said, “Why could we not drive it out?” 20 And He *said to them, “Because of the littleness of your faith; for truly I say to you, if you have faith the size of a mustard seed, you will say to this mountain, ‘Move from here to there,’ and it will move; and nothing will be impossible to you.”

So I ask what has God placed before you today? Whether it is a call to meet a challenge or to endure a trial, trust Him, obey Him, and watch Him show up!

Let’s pray. Father God you are full of grace. We would not be here right now with it. Lord like the disciples we too can have little faith. So Father I pray you would fill us up with faith. That we would be bold and courageous to share your word here in Ocean View. Lord I pray you would enable us to be equipped to build your kingdom here. We love you Father. We thank you for your endless grace. We thank you for all you have done and will do for us. We pray in Jesus name. AMEN