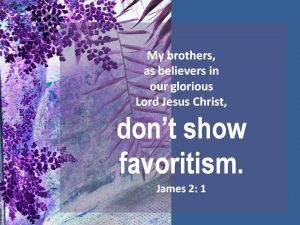 Be Consistent with Everyone

Let’s look at James 2:1: “My brothers, as believers in our glorious Lord Jesus Christ, don’t show favoritism.” Once again, James reveals his tenderness toward his readers when he calls them “brothers.” This is his preferred way of addressing them as he does so 15 times in this book. He also calls them “believers.” We are brothers and believers because we are in the same family and on the same team. There is therefore to be no distinction as Paul makes clear in Galatians 3:28: “There is neither Jew nor Greek, slave nor free, male nor female, for you are all one in Christ Jesus.” 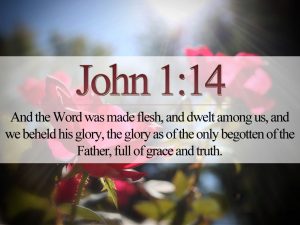 Would you notice next how he refers to Jesus? James is the half-brother of Jesus but he doesn’t make mention of this at all. Instead James calls Him “glorious.” Jewish-background believers would have equated this with God’s Shekinah glory that was on display as the Israelites were led in the desert. John 1:14 says that Jesus is God’s glory come down to earth: “The Word became flesh and made his dwelling among us. We have seen his glory, the glory of the One and Only, who came from the Father, full of grace and truth.”

Let’s get straight who we are. We are brothers and believers. And let us focus on who He is. He is the glorious Lord Jesus Christ. In light of who we are and who He is, we’re told how to treat others: “Don’t show favoritism.” This is in the present tense which means we’re to “stop showing favoritism.” To show favor literally means, “to accept the face” of someone. It’s the idea of turning toward the one and turning away from the other based on outward appearance.

To show favoritism is incompatible with our faith because Acts 10:34 says: “God does not show favoritism.” God is the ultimate umpire according to 1 Peter 1:17 because “He judges each man’s work impartially.” As ones who claim His name He expects us to treat people fairly as Leviticus 19:15 says, “Do not pervert justice; do not show partiality to the poor or favoritism to the great, but judge your neighbor fairly.” Warren Wiersbe nails it when he says: The way we behave toward people indicates what we really believe about God. 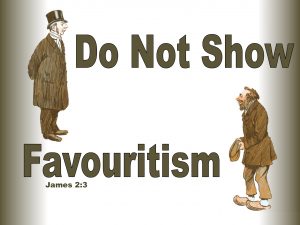 As a good preacher, James makes his point that we are not to show partiality and then he illustrates it so that it sinks in a bit deeper. Look at verse 2: “Suppose a man comes into your meeting wearing a gold ring and fine clothes, and a poor man in shabby clothes also comes in.”

When someone wore a gold ring back then they did so to let others know they were rich. The text literally reads, “a gold-fingered man.” Fine clothes were often bright and flashy, sometimes with silver sewn into them so they glistened in the sunlight. I googled “most expensive suit” this week and found a suit made from a blend of Cashmere wool and silk that contains over 480 diamonds. Each gem is half a carat for a total of 240 carats of bling. It sells for $892,500. If someone came in here wearing that they would stand out for sure. In contrast, how would you feel if a poor person came in [the doors] wearing the only set of clothes he owns? The word for “shabby” means vile, dirty and disheveled. Historians estimate that up to 90% of Palestinians back then were considered poor and would have worn homemade clothing.

James says that we’d be prone to show partiality to the man wearing fine clothes. Verse 3 uses the phrase, “If you show special attention” which means to “gaze upon.” It’s easy to turn our attention away from the glory of the Lord to the material splendor of someone’s clothing, car or status. To the finely-dressed man we’d say: “‘Here’s a good seat for you,’ but say to the poor man, ‘You stand there’ or ‘Sit on the floor by my feet.’” The flashy guy gets the best seat; the filthy guy gets the floor. That’s an accurate picture of what we do when we think we’re better than others because we treat them as if they are beneath us. I like what Jesse Duplantis says about pride and prejudice. “We were all made of dirt… there’s white dirt, red dirt, yellow dirt, brown dirt, and black dirt…we all came from the same place…we’re dirt.” Too many times we judge someone’s character by their outward appearance while forgetting that we’re all smelly sinners. 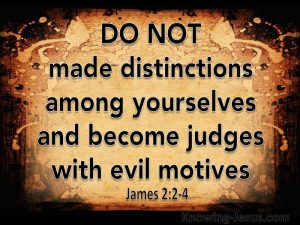 In essence we’ve become like replacement officials, taking God’s judging job away from Him when we operate like this. Last time I checked He doesn’t need any help running the world. Check out verse 4: “Have you not discriminated among yourselves and become judges with evil thoughts?” It’s so easy to set ourselves up as judge and jury, isn’t it? One reason they fawned over the rich man is that they thought he could increase their offerings or that somehow he would do something special for them. Their motives were all messed up.

Let’s face it. We tend to judge the better off as better. We’re prone to give preference to the pretty or to those who make us look good or can do something good for us. Our focus must be on the true glory of the Lord Jesus Christ and not the passing glory of outward appearances. Since everybody matters to Jesus, everyone must matter to us. Stephen Felker puts it like this: “The inclusive gospel cannot be shared by an exclusive people.

Recognize Your Own Contradictions. In verses 5-7, after giving another affectionate appeal: “Listen, my dear brothers…” James asks four questions to get us to see the contradictions that reside within us. Each question expects an affirmative answer.

Let’s keep in mind that Jesus often blessed the poor (Matthew 5:3) and warned the wealthy (Matthew 19:23-24). Jesus himself was poor…his parents borrowed a manger; he borrowed a boat, a donkey and an upper room for the last supper. And, He was buried in a borrowed grave.

Develop Compassion for All   We’re called to treat people consistently but it doesn’t take long to realize how many contradictions surface in our own lives. In verses 8-13 we’re given some practical ways that we can develop some compassion and move toward mercy. 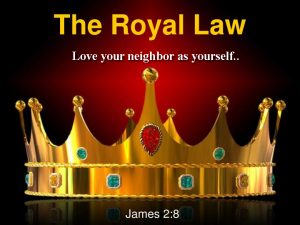 Brothers and sisters, and fellow believers in the glorious Lord Jesus Christ, it is impossible to truly love your neighbor and show favoritism. Can you say that you love others as much as you love yourself?

What’s the harm in ignoring people we think are different or strange or weird? Some of us look down on people of other colors or countries. Or maybe we separate people according to gender or generation, income, where someone lives, popularity or personality. Or perhaps we judge based on job or no job, background or disability or simply because they’re not in our clique. Others of us act like snobs when we see someone struggling with something we don’t struggle with. Some of us hear about what God is doing in other parts of the world through missionaries and we just don’t care. Who, outside your present circle of friends, have you included in your life lately? Who’s invisible to you? 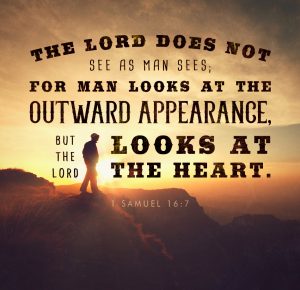 I’m struck by how even the prophet Samuel was prone to be partial based on appearance and stature and experience when he was sent to find the next king. He went through seven sons of Jesse and finally had to ask if there were any more. Finally, young David is brought out and sure enough, he’s the one God had selected. Here’s what Samuel learned through this in 1 Samuel 16:7: “Do not consider his appearance or his height, for I have rejected him. The Lord does not look at the things man looks at. Man looks at the outward appearance, but the Lord looks at the heart.” If only we could just see the heart of people instead of being so quick to make snap judgments based on appearances!

and what we do because we’ll be judged accordingly. We would rather not have people judge us, therefore let’s not judge them. Jesus said it like this in Matthew 7:1-2: “Do not judge, or you too will be judged. For in the same way you judge others, you will be judged, and with the measure you use, it will be measured to you.”

We’re called to be merciful because we’ve received mercy. This kind of mercy “triumphs,” which means, to “exult over or against.” There is a quote that says: “Never look down on anybody unless you are helping them up!” Jesse Jackson

Don’t you love that God is moved to be merciful to us? Micah 7:19: “You do not stay angry forever but delight to show mercy.” God saved us in spite of our sins. Listen. If we get what we truly deserved, we’d be in hell right now. We don’t want justice. We want mercy. And so let’s give mercy to others as well.

In an old Life Magazine photo essay, people from all walks of life from the homeless to Fortune 500 executives were photographed. Every one of them was just wearing a towel wrapped around their bodies. Do you know what the conclusion was? They all looked the same! 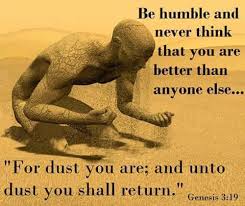 Why is that? Because we are the same. You are not better than anyone else. Nor is anyone else better than you. You’re made from dirt and so am I. They are sinners and so are you. Your sins don’t smell any better than theirs. And since we’ve received mercy, it’s imperative that we become messengers of mercy to others. It’s time to pulverize your prejudices. Step out of your social networks.

Here’s a question. Are you ready to give God His judging job back? My dear brothers and believers in the glorious Lord Jesus Christ, let’s make the right call and live on mission right where we are. And let’s support and encourage those who are missionaries entrusted with the message of mercy.

Let’s pray. Father God we thank you for the mercy you give us. We thank you for all that you have provided both good and bad. As James says “Count it all joy” help us to do this. Lord God I pray for this church as we grow and move forward that we would be able to show mercy to others as you have for us. Lord help us to see any favoritism in our lives and help us to slay them. Lord supply us in all that we do. I pray our lives would glorify you. In Jesus name. AMEN