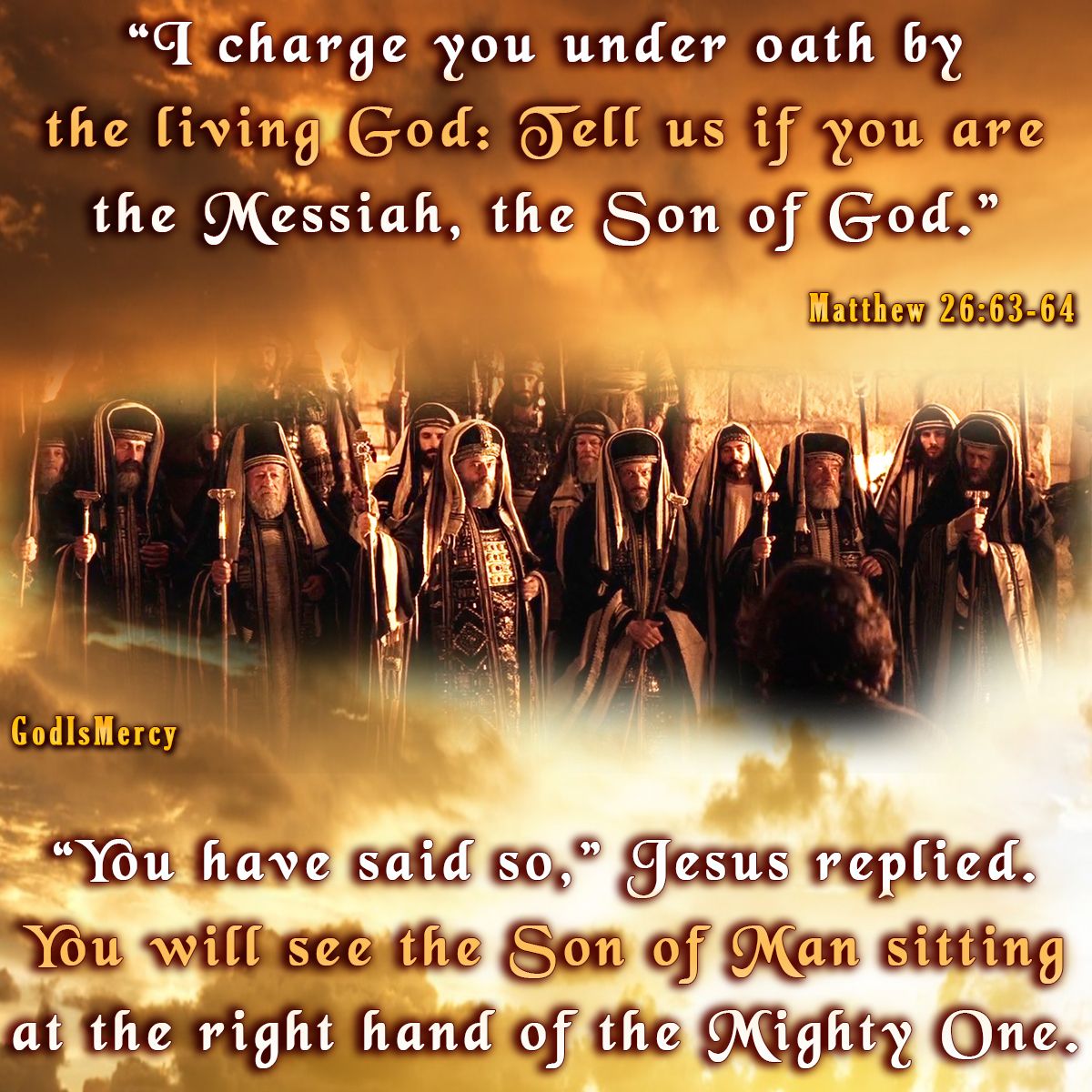 Now, today’s Sermon is from Luke 23:1-25.  We start out this sermon, following Our Lord’s nighttime arrest at the Garden of Gethsemane…and during His hearing before Caiaphas, the high priest used specific Jewish legal language to necessitate a legal answer from Jesus…As Matthew puts it this way in 26:63…”But Jesus kept silent. And the high priest said to Him, “I adjure You by the living God, that you will tell us whether You are the Christ, the Son of God.”

You see, the Jewish legal precedent for this type of questioning goes way back to Leviticus 5:1  “Now if a person sins after he hears a public adjuration to testify when he is a witness, whether he has seen or otherwise known, if he does not tell it, then he will bear his guilt.” So, through this particular questioning…a solemn, factual, and lawful answer was required of Jesus…who at that point, simply answered… “Yes, I am”!. Jesus told them the truth!  So, in accordance with Jewish Law, Jesus was guilty of blasphemy…because He claimed to be the “Son of God”…And now that they had  found Him guilty, it was time for the next phase of their insidious plot to have Jesus executed…The crafty Jewish Chief Priests of the Sanhedrin had claimed that they did not have the power to put Jesus to death…Yet, they were absolutely mindful of the angry crowd that could turn on them also…a mob who was every bit ready for blood…

So, they agreed to bring Him before Pilate, the Roman Governor of Judea…who did have the authority to execute someone, and have them crucified.  You see, My Friends, Our Beloved Lord had already begun to suffer for us…As a minor note:   You may be interested to know, that today, built over the top of the very hole that led down into the dungeon where Jesus had been placed awaiting His trial before the Sanhedrin…is a Chapel, permanently marking the spot. 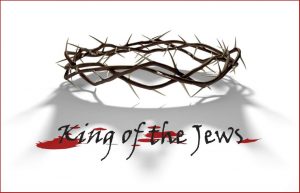 So, now as we begin chapter 23, listen to what Luke tells us in the first two verses…”Then the whole body of them got up and brought Him before Pilate. And they began to accuse Him, saying, “We found this man misleading our nation and forbidding to pay taxes to Caesar, and saying that He Himself is Christ, a King.” We can see here that the whole body of the Sanhedrin, the chief priests, elders, and scribes, along with the angry crowd, proceeded to the Praetorium (or residence) of Pontius Pilate…and while they loudly gathered there before him, they not only accused Jesus of crimes against the Jewish Mosaic laws regarding blasphemy…but those of Rome and its Emperor as well. Pilate, whose name derives from the Latin word “pileatus or  pileus”, which meant the cap or badge of a “freed slave” or the descendant of one…hated the Jews and their religious beliefs, and he hated the fact that they were always on the verge of the next revolt against their Roman rulers…he missed and longed-for Rome, with its open societal lifestyle.Consequently, while he was stuck there in Judea, he was always cautious and hesitant with any requests from the Jewish people, and especially their religious Council…And it was no different when they brought Jesus before him…Now, wary and guarded, he questions Jesus as Luke tells us in verse 3…So Pilate asked Him, saying, “Are you the King of the Jews?” And He answered him and said, “It is as you say.” 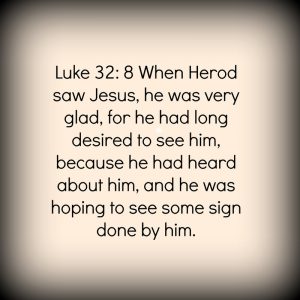 Pilate found nothing suspicious or subversive in what Jesus said to him, so he says this in verse 4…Then Pilate said to the chief priests and the crowds, “I find no guilt in this man.” But typical of the Jewish mob and their priests, they continued yelling and wanting Pilate to find our Lord guilty…making claims against Jesus as Luke says in verses 5 & 6… “But they kept on insisting, saying, “He stirs up the people, teaching all over Judea, starting from Galilee even as far as this place.” When Pilate heard it, he asked whether the man was a Galilean.Here, Pilate saw an opening that would absolve him of having to deal with Jesus and the Jewish protestors in Jerusalem…because Galileans were subject to Herod’s jurisdiction…Pilate sent Jesus to Herod…But by coincidence however, Herod also happened to be in Jerusalem, at that particular time, for the Passover festivities. Now, as Luke describes in verses 8 thru 12…Herod, at first, was very glad to see Jesus, because he had heard of the miracles that Jesus had performed and wanted to see a sign from him…So, amidst the loud accusations by the chief priests and scribes present, Herod questions our Lord at length, but Jesus refuses to answer…Obviously, this doesn’t make Herod happy in the least, so Herod and his soldiers treat Jesus with contempt, mocking Him…then they dressed Him in a purple robe and sent Him straight back to Pilate…Now, Herod and Pilate had been enemies until that very day…but as a result of their both finding it difficult to deal with Jesus…they became friends…

Following our Lord’s return to Pilate’s custody, Luke says this in verses 13 thru 16… Pilate summoned the chief priests and the rulers and the people, and said to them, “You brought this man to me as one who incites the people to rebellion, and behold, having examined Him before you, I have found no guilt in this man regarding the charges which you make against Him. “No, nor has Herod, for he sent Him back to us; and behold, nothing deserving death has been done by Him. Therefore I will punish Him and release Him.” 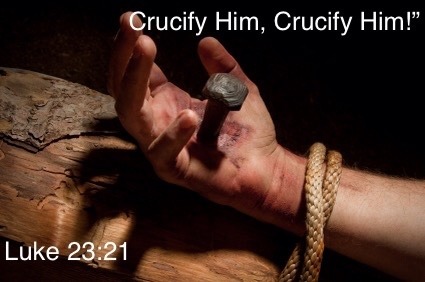 Pilate, feeling assured that he was making the right decision, ascended the judgement seat to render his verdict…but it was at this particular moment, that Pilate’s wife Claudia sent a message to him imploring him to have nothing to do with this “just or righteous person”…because she had a dreadful dream about Jesus that had caused her severe mental anguish. Now, during the feast of Passover, while Jerusalem was visited by millions of pilgrims there to enjoy the festivities, it was common and acceptable to release one prisoner…So Pilate thought that he would have Jesus punished and then release Him and that would be the end of it…But no, that did not satiate the bloodlust from the Jewish people…Hear what Luke tells us in verse 18… But they cried out all together, saying, “Away with this man, and release for us Barabbas!” Most of you already know of Barabbas, the murderer, who was being held in prison and awaiting judgement…but Pilate still wanted to release Jesus instead, because He was a righteous and innocent man…so Pilate addresses the crowd again, but all he hears is them calling out, “Crucify, crucify Him!” Then, finally, and perhaps feeling overly anxious with the increasing agitation of the Jewish mob, Pilate says in verse 22… And he said to them the third time, “Why, what evil has this man done? I have found in Him no guilt demanding death; therefore I will punish Him and release Him.”At that point, the shouts and calls from the angry crowd became deafening…and Luke says in verse 23… But they were insistent, with loud voices asking that He be crucified. And their voices began to prevail.Ultimately, Pilate relented…as Luke tells us in these last two verses 24 & 25 And Pilate pronounced sentence that their demand be granted. And he released the man they were asking for who had been thrown into prison for insurrection and murder, but he delivered Jesus to their will.

My Friends, I know that listening to these words may weigh heavy on the hearts of those of us who love our Lord Jesus…but we must remember, that all of this was by the Father’s will…it was necessary so that Jesus could fulfill scripture, and even more than that, so that all of us could be redeemed and saved from our sins…remember, it is because of what Christ did for us, that we may have the joy of eternal life with Him in heaven.